Two Austrian travelers Helmut Kapeller (Helmut Kapeller) and Kučers Walter (Walter Kutscher) on Saturday, the first June at. 10.00 in the Freedom Monument will parade through the ancient Amber Road. 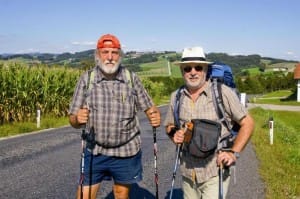 Almost three-month-long expedition members will travel from Riga to Karnuntumai (Austria) a total of more than 2,100 kilometers, passing through Latvia, Lithuania, Poland, Czech Republic and Austria.

During the meeting with the board of “Riga | 2014” Diana Civle managers and program managers Aiva Rosenberg, travelers stressed that it was Riga’s emergence as the European Capital of Culture, has led to a move to begin in Riga.

“Riga 2014 in a prominent role to amber in a number of international projects through building a new European cultural networks, which combine the ancient amber trade route in the new interdisciplinary collaboration,” informed D.Civle.

“European Capital of Culture in Riga want to show how modern or future amber home,” characterized by A. Rosenberg, Austrian travelers telling us RTU Professor Inga Ļašenko invented amber thread, having the medicinal properties. This unique invention used in cooperation with the Foreign Ministry was created by the artist Iveta Vecenanes show that appeals to Riga in 2014 and is now seen in Washington, DC (USA). A. Rosenberg welcomed the fact that the Baltic amber connoisseurs and expanding circle of friends.

It is planned that in 2014. book will be released in the spring of this trip experiences and presentation will take place in Riga.

The best places to visit in Riga

The best places to visit in Riga! A lot of people think that Riga is…

There is always something going on in Riga

There is always something happening in Riga and it will never be finished. Here are…

Discover Art Nouveau heritage in Riga. Our great tour guides will take you to the most famous Art Nouveau spots in Riga.

Did you know that Riga has the biggest Art Nouveau buildings collection in the whole world? There are so many beautiful sights waiting to be explored. Just book your Riga Art Nouveau tour and we will show you the best Art Nouveau sights that Riga has to offer.
Only the best Riga Tours from Around Latvia.
Copyright AroundLatvia - All Rights Reserved. Developed by KurlandMedia
Back To Top
We use cookies to ensure that we give you the best experience on our website. If you continue to use this site we will assume that you are happy with it.OkPrivacy policy